Home > News > Astrocent > Professor Tomasz Bulik: “Our infrasound sensors are a product that will find its niche on the market”

Professor Tomasz Bulik: “Our infrasound sensors are a product that will find its niche on the market”

Two groups in AstroCeNT: the Seismic Sensors group led by prof Bulik, and the Electronics and Data Acquisition and Processing group led by dr Suchenek have teamed together to work on a common project – investigation of infrasound sensors. The project is well advanced: dr Patecki built a stand for calibration and testing possible designs, while dr Suchenek is the author of several concepts of electronics to acquire and process data. Here is what the scientists say about the project.

Your research team is developing a prototype of an infrasound sensor. How does this project relate to the main goal of AstroCeNT?

Tomasz Bulik: One of AstroCeNT’s main research areas is the study of the invisible universe, which we can observe today in gravitational waves. The sensors we are working on will be installed in VIRGO – gravitational waves detector located in Italy. Currently, the detectors have a frequency range of 50 to several thousand hertz. To achieve our goal, it is very important to go down to the lower frequencies, where there are various types of noise that need to be dealt with. Among others, these include seismic noise and Newtonian noise. Seismic noise is caused by ground vibrations transmitted to the detector, and Newtonian noise is created by a gravity gradient or local variations in the Earth’s gravitational field. In order to filter out this noise, we must first measure it. And to measure it, we need to characterize the infrasound field inside the detector buildings around the test masses. For this purpose, you can either buy a lot of universal high-quality microphones, or create custom microphones dedicated specifically to this problem.

Marcin Patecki:
We want to make infrasound sensors ourselves. First of all, because there are few such sensors available on the market. Secondly, they are very expensive, because they have  narrow application spectrum. Their prices can reach several thousand Euro per unit. Our goal is to create a sensor with a total cost of several hundred Euro. 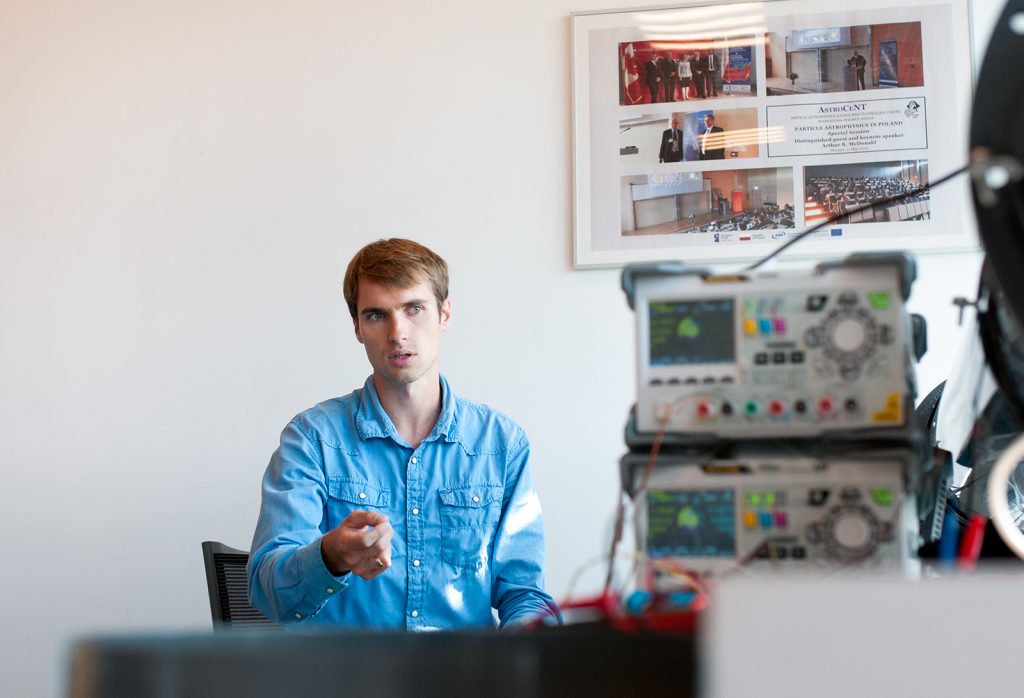 Can such microphones be useful in “earthly” matters?

MP: Of course, it can. Infrasound sensors are widely used in science and industry. We use them to study volcanoes and oil deposits underground. In addition, they are used to monitor wind farms, city noise and its impact on living creatures, as well as to detect explosions, for example nuclear tests… Infrasound sensors are also used in medicine – for the diagnosis of heart diseases. 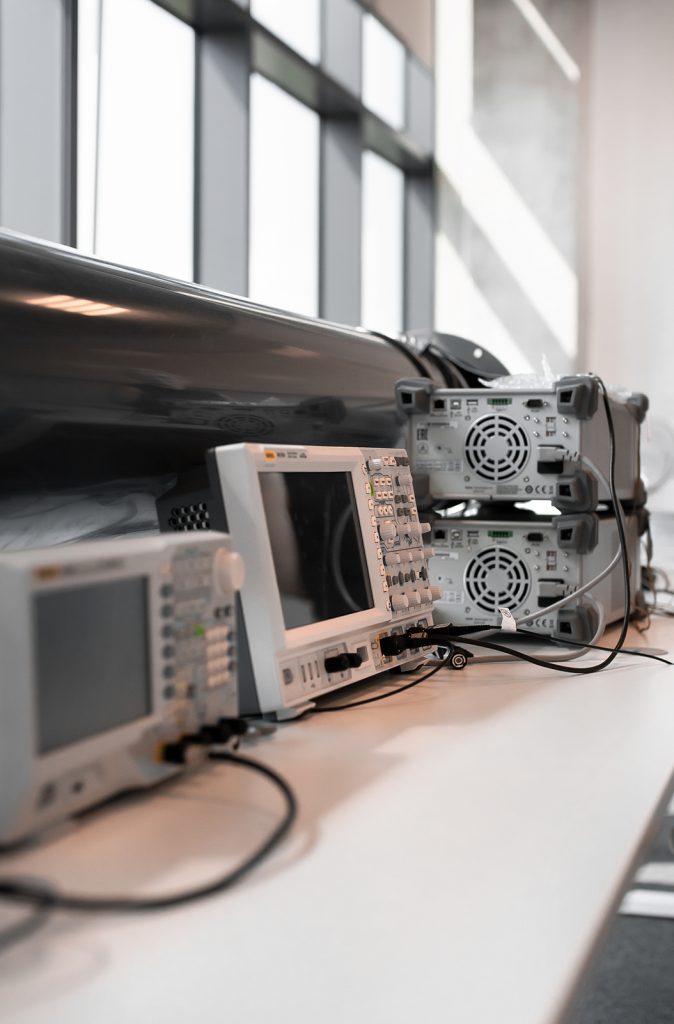 Why is it so important to record gravitational waves?

MP: This is a new kind of signal that we are able to pick up from outer space. This signal carries unique information that cannot be obtained by other methods, because the gravitational wave is practically undamped. Light may be obscured by an object, and the gravitational wave passes through space undisturbed.

TB: This is a new window to the world through which we can see phenomena such as the formation of black holes and heavy elements in the universe. For example, one recent observation recorded the merger of two neutron stars ejecting large amounts of heavy elements, including gold with a mass 30 times that of the Earth. I don’t think it will affect the gold price in the market… (laughs).

We, as organisms, also contain certain amounts of elements that arise from the fusion of neutron stars. This research, too, influences our knowledge about life and about ourselves.

One more important thing: if we only see the background of the gravitational waves, then we will be able to look at the universe when it was 10-34 seconds old. Now, with the help of microwave background radiation, we can only go back to the time when he was 300,000 years old. The possibility of exploring the early universe many orders of magnitude further than we can do today is a new and very interesting window into the properties of the cosmos. 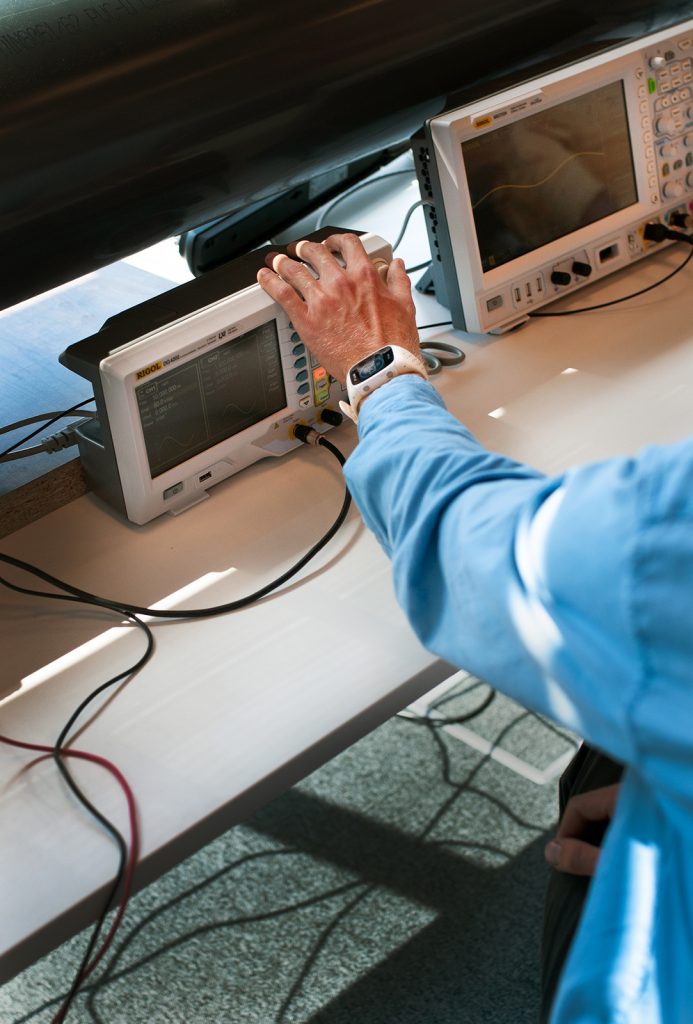 Are the devices we observe in this room parts of a measuring stand?

MP: Yes. We created this stand to verify whether our solution is correct or not. The problem with infrasound is that these are acoustic waves of great length. The wavelength of the 1 hertz sound wave is approximately 340 m and it is difficult to produce in a small laboratory. Second thing – it would take a very large object to create such a wave. The best solution is to have a device, for example a speaker, with a diaphragm diameter of several hundred meters. There are no such speakers. Here we use a device with a diameter of 30 cm. This is a large bass speaker used to produce low frequencies. But these are not the low frequencies we need. That’s why we ordered this tube. This is the tube normally used for ventilation and air conditioning systems. It is made of PVC, 28 cm in diameter, 2 m long, extendable up to 5 m. At one end of the tube there is a loudspeaker that produces a standing wave inside the tube. By placing the microphone in the place of maximum changes of the acoustic field, we are able to measure these low-frequency sound waves. Due to the fact that the sound is enclosed inside the tube, we, being outside, are protected from the sound field, the impact of which on human health is not well studied. 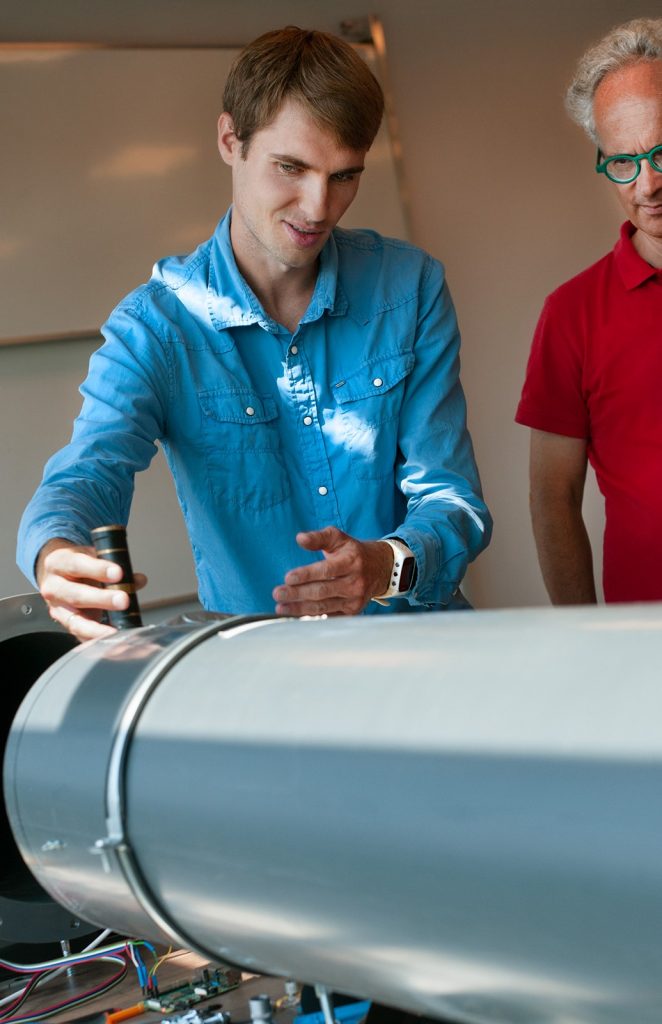 So, there is already a prototype, the efficiency of which can be tested using this tube…

MP: The prototype already exists and works quite well. Now we are checking whether it is resistant to various factors, for example, temperature changes. We are also testing its stability during long-term operation to make sure it will not lead to degradation of its properties.
We are using a reference microphone to verify that our sensors are working well. This is a high-quality standardization microphone sensitive to low frequencies, as the manufacturer claims. By comparing our sensor with this microphone, we can tell if our solution is working well. So far it is quite promising. 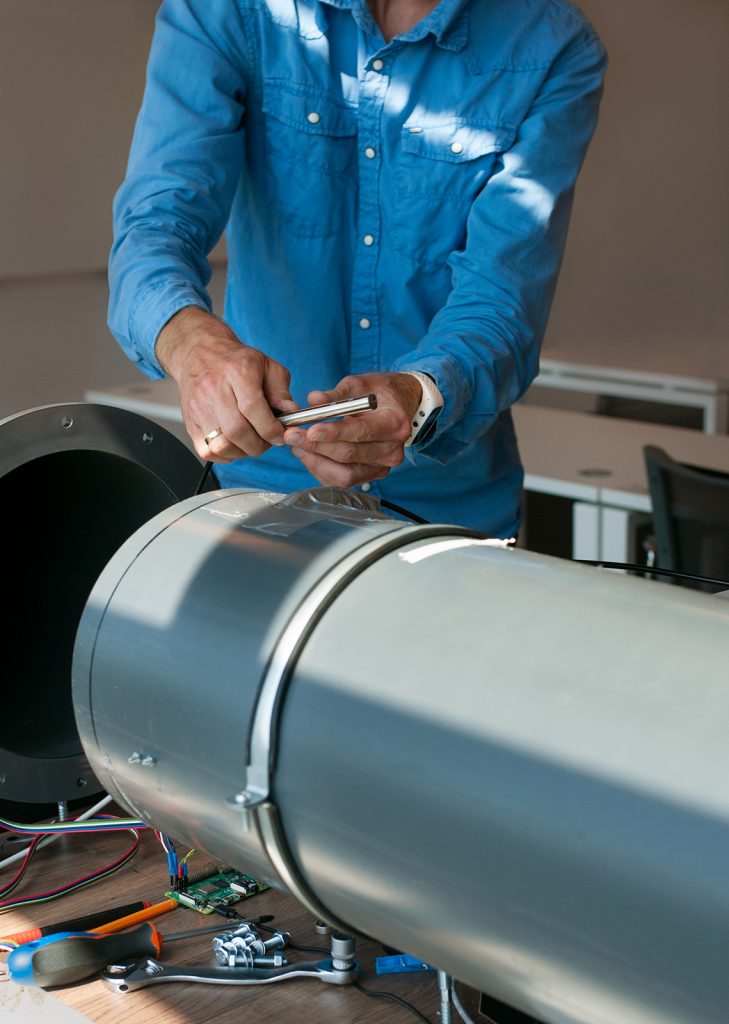 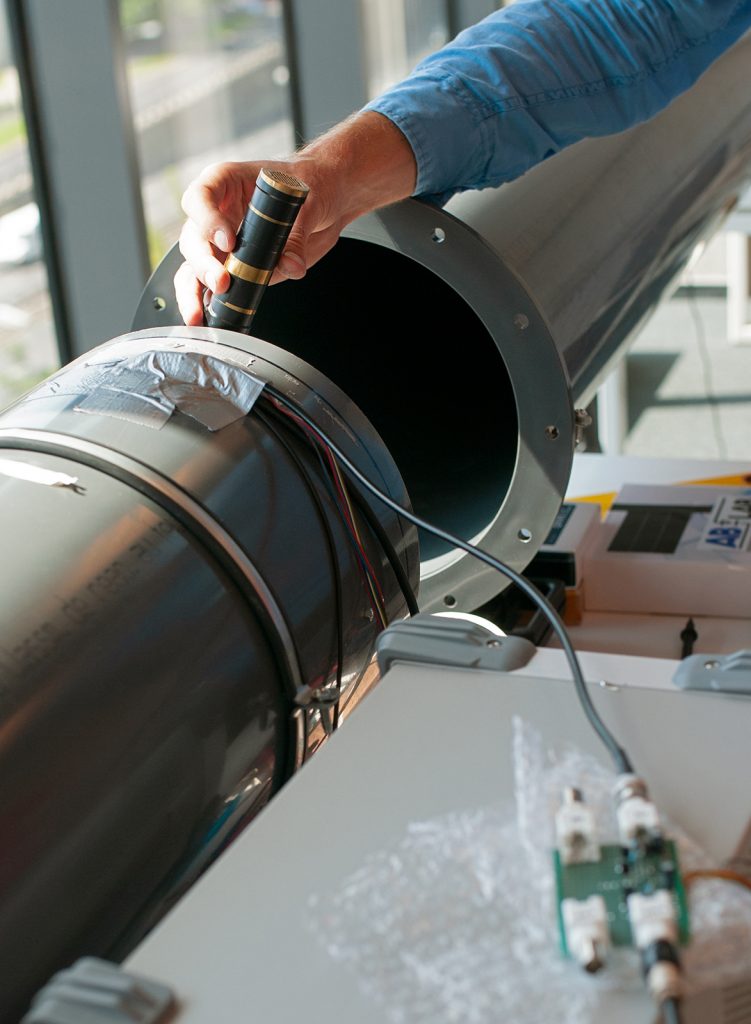 What is the time distance between creating a prototype and producing it on a larger scale?

TB: We won’t be making many of these sensors; we’ll outsource them. For the first initial measurements in VIRGO, we need about 200 microphones. When this project starts (I hope it will happen in a month or two), we will have to work more closely with the companies that are involved in it. We are already negotiating with them and trying to ensure that these sensors will be delivered to us to us fairly quickly.

Are these companies Polish?

TB: Yes. The company we are currently working with has already built data acquisition systems for us, which will soon be installed in VIRGO.

Is there a chance that the sensors created by AstroCeNT will enter a wider market? Or will VIRGO stay the main recipient?

TB: Monitoring infrasound fields is very important in industrial applications. Potentially, the sensors we make are competitive due to a unique combination of parameters such as sensitivity and bandwidth that are not yet available on the market. In my opinion, this is a product that will find its niche. 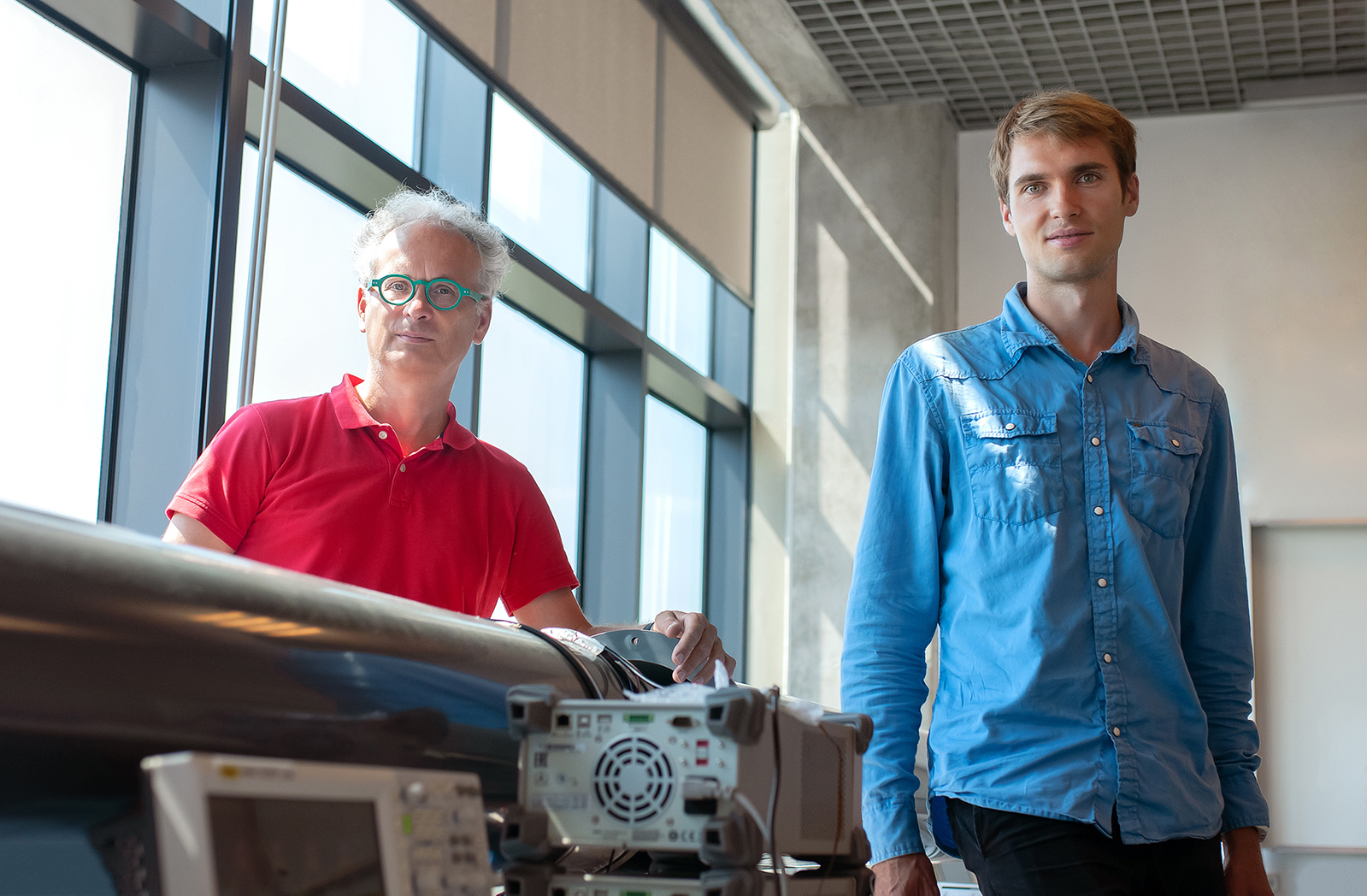 On the 1st of June 2022 AstroCeNT was visited by Dr Tomasz Rzymkowski, Vice Minister of Education and Science. The purpose of the visit of our distinguished guests was twofold: to learn more about the field of particle astrophysics, including the research done at AstroCeNT, and to meet with an initiative group to build in Poland an underground laboratory.

The Vice Minister showed much interest in the initiative and encouraged the group to produce a report with more information about possible sites and about the role that the Polish underground laboratory could play in Polish science and economy, both locally and an international level.