Professor Arias Reyes from Chile has arrived at AstroCeNT with a prestigious NAWA scholarship.

Professor Paola Arias Reyes obtained her PhD degree in 2008. Her thesis entitled “Lorentz Invariance Violation in QFT“, was prepared under the supervision of Prof. Jorge Gamboa. In 2009, she was awarded a postdoctoral Fellowship from the Alexander von Humboldt Foundation to work at the Deutsches Elektronen Synchrotron (DESY), Hamburg, Germany in the group of Dr Andreas Ringwald. During the stay, she started to learn about Weakly Interacting Slim particles (WISPs) such as axions, hidden photons and milli-charged particles and their role in physics and cosmology, line of research that she has continued ever since.

Between 2011 and 2014, she held a postdoctoral position at Pontificia Universidad Católica de Chile and in August 2014 she joined the high energy group of the physics department at Universidad de Santiago de Chile (USACH) as an Assistant Professor where since 2019 she has been employed as an Associated Professor. Her research interests are mainly focused in particle physics beyond the Standard Model as axions and hidden photons and their potential role as dark matter candidates.

At AstroCeNT, Professor Arias Reyes will work on a project entitled Dark Matter: Theory and Experimental Searches. Together with other scholars at AstroCeNT, she will work on developing frameworks to extend the Standard Model of Particle physics by considering WIMP (Weakly Interacting Massive Particles) and WISP (Weakly Interacting Slim Particles) as dark matter candidates that are compatible with observations and experiments. Her stay, planned until March 2020, is funded by the NAWA (the National Agency for International Exchange) program. 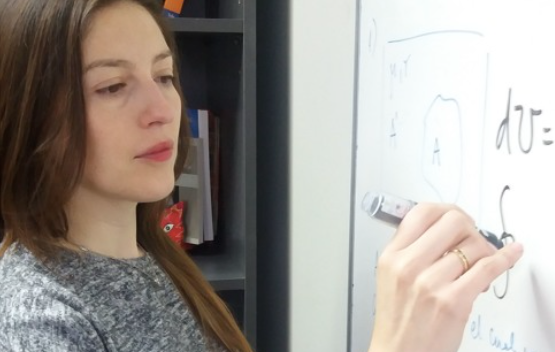