AstroCeNT is becoming an international spot where big science and new technologies meet, revealing an exciting future of international cooperation.

Her Excellency the Right Honourable Julie Payette visited AstroCeNT during her first visit to Poland. She was accompanied by Her Excellency Leslie Scanlon, Ambassador of Canada to the Republic of Poland. They were greeted by the director of AstroCeNT Professor Leszek Roszkowski together with Dr Grażyna Żebrowska, Director of Department of International Cooperation of the Ministry of Science and Higher Education and Professor Maciej Żylicz, President of the Board, Foundation for Polish Science at a special session of AstroCeNT’s International Scientific Committee.

Professor Roszkowski initiated a discussion among the twenty guests of the session by giving a short presentation on AstroCeNT. He underlined the mission of the centre which is to unravel the myseries of the yet undiscovered and unseen “dark” Universe. The Governor General underlined the uniting power of “Science Diplomacy”. As it goes beyond borders, science contributes enormously to understanding each other better, and thus enables us to find ways to work together across political and other barriers.

The Governor General, who is a former astronaut, worked as Chief Astronaut for the Canadian Space Agency and was twice onboard of the International Space Station. Professor Roszkowski suggested that instruments are key to successful research. Professor Roszkowski emphasized that in order to explore the invisible Universe, one needs novel instruments that are sensitive enough to be able to measure extremely weak signals. By contributing to an international effort of developing them, AstroCeNT will be in a strong position to break new grounds in the research of gravitational waves, black holes and dark matter.

Professor Stavros Katsanevas, Chair of AstroCeNT’s International Scientific Committee, stressed that the Centre’s main objectives are in perfect line with the Roadmap for 2017-2026 of Astroparticle Physics European Consortium – ApPEC. He also provided an overview of the upcoming developments in gravitational wave detection. A dramatic increase of the number of detected events is of the most anticipated developments in the near future.

Together with Professor Mark Boulay, Professor of Physics and Tier-1 Canada Research Chair in Particle Astrophysics and the DEAP Project Director, Professor Roszkowski announced AstroCeNT’s joining the DEAP collaboration (a Canadian-led experiment which investigates the origin of dark matter in our universe). A formal intention of collaboration with the Arthur B. McDonald Institute and with SNOLAB —  an expansion of the existing facilities constructed for the Sudbury Neutrino Observatory – was also officially announced by Professor Roszkowski by co-signing for both a Memorandum of Understanding. Cooperation with Canada has this way gained a much firmer ground. 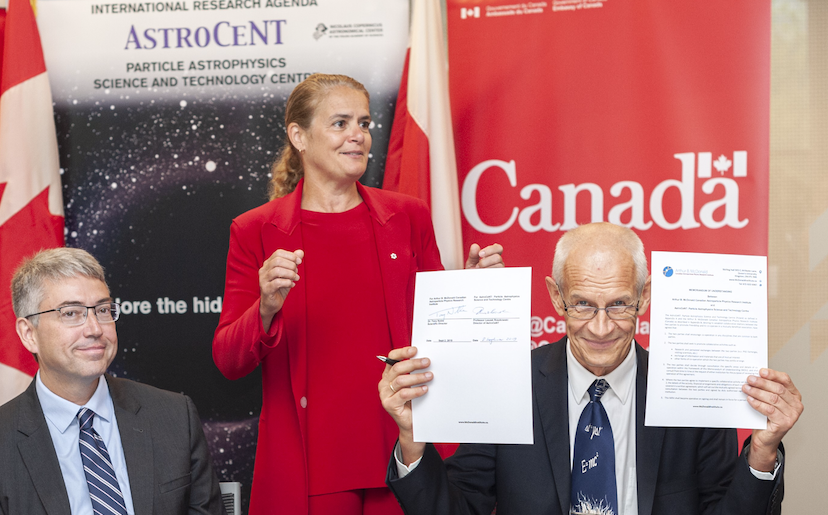 On 21-23 September the LIDINE 2022 conference (Light Detection in Noble Elements) was held in Warsaw. This year it was organized by Nicolaus Copernicus Astronomical Center (NCAC) and, in particular, by AstroCeNT.

The objective of the LIDINE conference series is to promote discussion between members of the particle and nuclear physics community about detector technologies based on noble elements and their applications such as: dark matter searches, experiments measuring neutrino oscillations, solar and supernova neutrinos, coherent elastic neutrino-nucleus scattering, neutrinoless double-beta decay, neutron EDM, and medical physics.